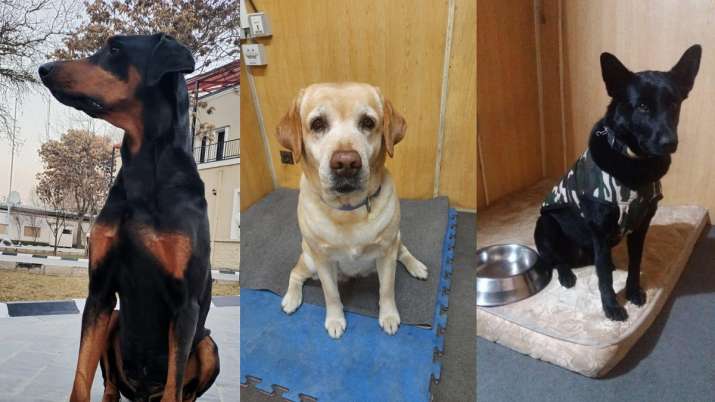 Three hero sniffer dogs of the Indo-Tibetan Border Police (ITBP), along with troops, were airlifted by the IAF C-17 aircraft from Kabul to the air force station Jamnagar in Gujarat amid unrest in Afghanistan. They reached the ITBP Chawala camp in Delhi on Wednesday.

The three K9s – Maya, Bobbi and Roobi were deployed to Kabul in 2019. They had secured the Indian Embassy in Kabul for the past 3 years with great bravery, professional skill and fierce loyalty to the troops of the ITBP.

They had protected the lives and limbs of not only Indian diplomats, but also local Afghan civilians working at the embassy. Reports suggest that the three K9s are extremely happy to hit Indian soil and return to the familiar sights, smells and sounds of our nation.

The dogs were trained at NTCD Bhanu, the elite dog training school in Panchkula district of Haryana.

The mission to evacuate nearly 200 people, including the Indian envoy and other personnel in two military planes, was accomplished with US support, a day after Kabul airport witnessed unprecedented scenes of desperate residents rushing there in an attempt to flee the country fearing Taliban brutality.

While the IAF’s first C-17 heavy lift aircraft evacuated more than 40 personnel on Monday, the second brought back around 150 people, including the ambassador, other diplomats, security officials and a number of journalists and Indians stranded on Tuesday afternoon.

The Taliban swept through Afghanistan this month, taking control of nearly every key town in the country amid the withdrawal of US forces that began on May 1.