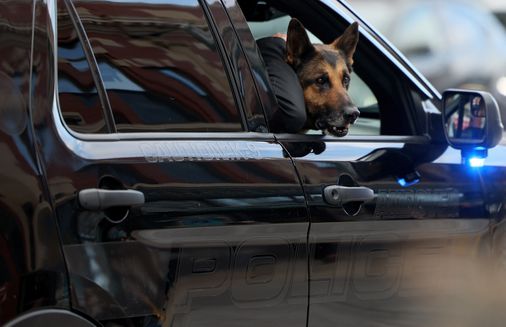 An Andover police K9 who spent 10 years on the force, sniffing drugs and responding to the Boston Marathon bombings, made his final lap through town on Wednesday.

K9 Grimm was diagnosed with an aggressive form of lung cancer after being ill for several days, Andover Police said in a statement.

“On the recommendation of his veterinarian, Grimm will cross the Rainbow Bridge this Wednesday,” the department said in a Facebook post. His partner and handler, Sergeant Michael “Mickey” Connor made “the hardest decision a K9 handler will ever have to make” to say goodbye.

Connor and Grimm drove from Andover Police Station towards the town center at around 10.30am on Wednesday, where members of the community were asked to line the streets in a final show of support for the brave German Shepherd.

The duo served the town of Andover for 10 years, solving numerous missing persons and drug cases, and also being at the scene of the Boston Marathon bombing and the Watertown standoff, according to the communicated.

Grimm was the second K9 Connor had lost, police said.

The public is encouraged to post a condolence message on the department’s Facebook page or drop a line at the police station, 32 North Main St., Andover, Ma., 01810.

Madison Mercado can be contacted at [email protected]