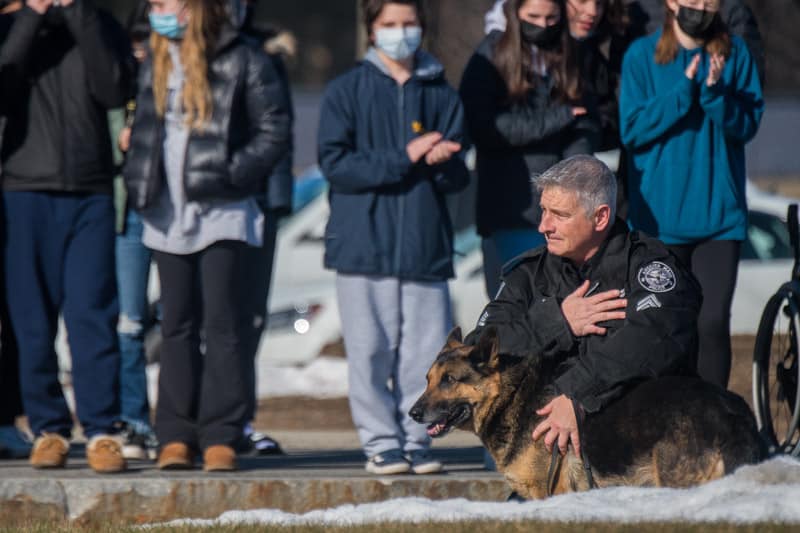 K-9 Grimm received a full salute on the high street of Andover on his last lap around town on Wednesday – the faithful German Shepherd was diagnosed with terminal lung cancer just days ago, after a decade of service with Andover Police.

Mickey and Grimm got into a cruiser car on Main Street on Wednesday morning. In the freezing cold, Grimm stuck his head out the window and smiled as Connor waved at the supporters who were waving signs and shouting for Grimm’s mercy. A dozen police cruisers followed them, many with other police dogs inside, barking their own tributes to Grimm.

Connor looked after Grimm for the 10 years of his service, housing him with his family.

“Just seeing Mickey with him was a really amazing bond,” Fitzgerald said.

“It’s heartbreaking. It’s going to be a tough day for them,” said Hannah Wilen, a friend of the Connor family.

Grimm’s service with the Andover police included the response to both the Boston Marathon and the ensuing standoff in Watertown. Police say he also helped find missing people and uncover more than 100 pounds of drugs.

The canine cop had been showing symptoms of illness for several days and a vet diagnosed him with an aggressive form of lung cancer that had already metastasized to his lymph nodes, according to Andover police. On the recommendation of the veterinarian, Grimm was put down on Wednesday.

In a social media post, police thanked the public for “their outpouring of love and support”.

“It was particularly touching for us and I know it meant the world to Sergeant Connor. The void left by Grimm’s unexpected passing will be a difficult time for us to navigate, but your support has made this a little easier,” the post read.