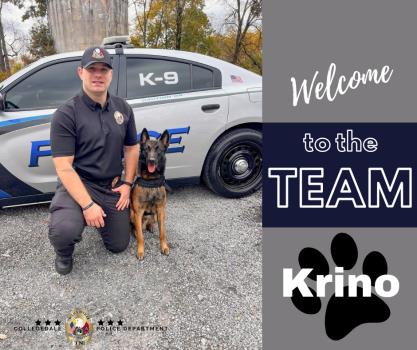 The Collegedale Police Department introduces the latest addition to its K9 program. Officer Krino, a five-year-old Belgian Malinois, came to them after serving honorably in the McMinn County Sheriff’s Office.

His partner is someone he already knows very well.

Constable Saxe had been Krino’s partner in McMinn County and had been since February 2020. Constable Saxe, a drug recognition expert and certified police K9 handler, was hired by the City of
Collegedale in August 2022. To avoid disbanding the team, McMinn County Sheriff Joe Guy offered to sell Krino to the city of Collegedale after Officer Saxe made up his mind.

Krino, badge number 328, is trained in narcotics detection and is currently working to receive his
certification in human follow-up. He is also bilingual, fluent in English and German.

“Originally used as a herding dog, the Malinois breed is a working dog. They have a good balance of lean muscle and high energy. They are very loyal to the people they love, which perfectly describes Krino “, the officials said.

“He likes to follow me around the house to see what I’m doing,” Agent Saxe said. “He is very nosy.
When I’m sitting on the couch or trying to relax he wants my attention and when I don’t give it to him he lies next to me and pouts until I do.

Krino likes to play and meet new people. His tennis ball, having his belly rubbed and playing outside are among his most beloved things. His favorite holidays are his birthday and Halloween because he can dress up in fantastical costumes.

Constable Saxe and Krino are the second K9 police team added to the Collegedale Police Department this year. The K9 program was relaunched in September after being on hiatus for several years.

“We would like to express our sincere appreciation to the Chattanooga Police Department and the McMinn County Sheriff’s Office whose support and partnership has been invaluable,” officials said.