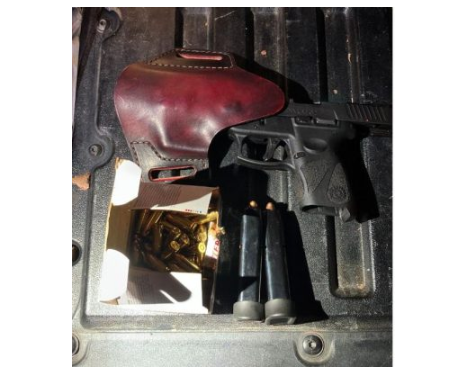 July 12, 2022 – Fond Du Lac County, WI – Another great job between our K9s, the MEG unit and the Winnebago County Sheriff’s Office to get the drugs out (Heroin, LSD, Psylocibin Mushrooms, Ketamine, Oxycodone and Marijuana ), drug money, an accused trafficker, and his gun on our streets. Below is a joint press release from our three agencies.

Results of a Joint Investigation into the Arrest of an Interstate Drug Trafficker and a Large Seizure of Illegal Drugs, Loaded Firearms and U.S. Currency

During the investigation, investigators intercepted a subject traveling to Wisconsin from out of state. K9 units from the Fond du Lac County Sheriff’s Office conducted a traffic stop on U.S. Highway 151 in Fond du Lac County, which ultimately resulted in the seizure of approximately 10 pounds of marijuana from high quality, three quarter pound high potency THC wax, over seven pounds of THC edibles and alleged amounts of heroin, LSD, psylocimin mushrooms, ketamine, oxycodone, over 21,000 US currency dollars and a loaded 9mm handgun. The vehicle was also seized and the subject arrested for possession and distribution of illegal controlled substances as well as weapons violation.

“Drug dealers with loaded guns pose a serious danger to public safety,” Attorney General Josh Kaul said. “Thank you to the law enforcement officers who participated in the collaborative investigation that led to this arrest and the recovery of multiple types of drugs and a loaded weapon.”

“The Fond du Lac County Sheriff’s Office continues to make drug crime enforcement a top priority,” said Fond du Lac County Sheriff Ryan Waldschmidt. “Time and time again, our MPs witness the devastating effects of drug distribution and use in our community, and the associated crimes that often accompany drug trafficking. This large seizure of a wide variety of illegal drugs, combined with a firearm and a large amount of cash, is the result of the hard work of our deputies and other Fox Valley officers who work every day in partnership with LWAM. We will continue our work to intercept these illegal drug shipments and hold accountable those who distribute these illegal items here. »

“One of the key things in addressing our overdose and addiction issues is arresting and convicting drug dealers,” Winnebago County Sheriff John Matz said. “We all know someone who has been touched by this affliction. We will continue to work together to resolve this issue. »

LWAM is a multi-jurisdictional task force comprised of investigators from participating law enforcement agencies in Winnebago, Outagamie, Fond du Lac, and Calumet counties. LWAM’s mission is the investigation and enforcement of state and federal drug trafficking laws with the goal of preventing the flow of illegal and dangerous drugs into the communities of these counties as well as holding offenders who have chosen to distribute dangerous drugs within these communities responsible for their criminal activities.

No further information can be released at this time as this investigation is still ongoing.