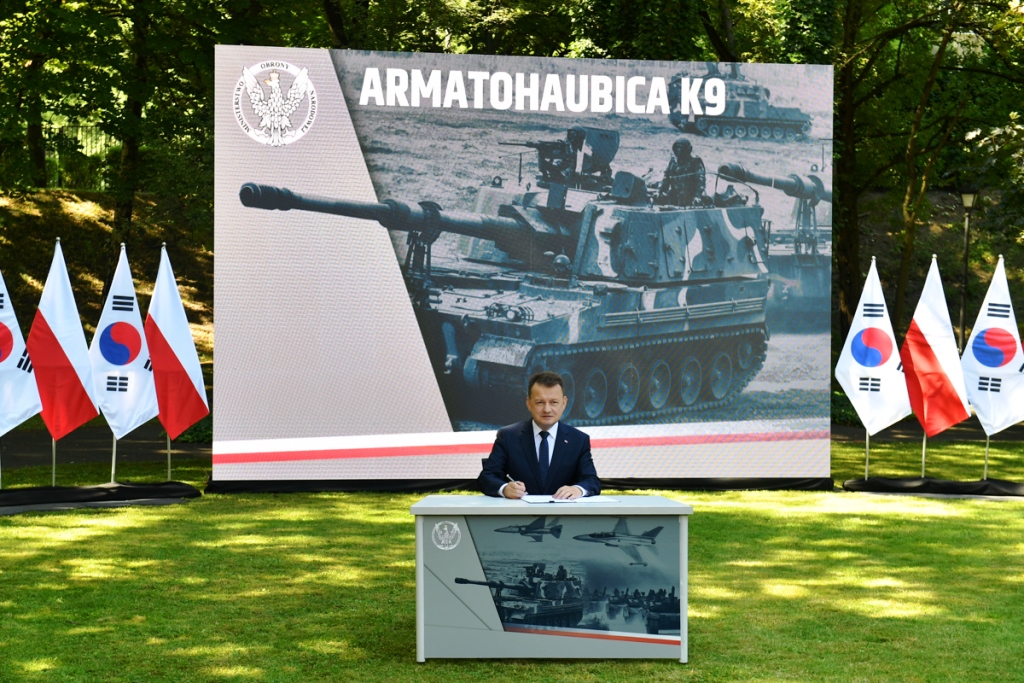 07.27.2022 – Framework agreements have been signed, which will significantly strengthen the Polish Armed Forces. This reinforcement is extremely important given the situation on our eastern border. We don’t have time, we can’t wait. We must arm the Polish army – said Mariusz Błaszczak, Deputy Prime Minister, Head of the Ministry of National Defense when approving contracts for South Korean military equipment.

On Wednesday July 27, Deputy Prime Minister Mariusz Błaszczak approved arms contracts with South Korea for the purchase of equipment for the Polish army. Contracts for K2 tanks, howitzers and FA-50 aircraft are one of the largest and most important Polish defense orders in recent years.

“Under the signed framework agreement, we will order 1,000 K2 tanks, more than 600 K9 howitzers and also 3 FA50 squadrons. We can say that we have already ordered such a weapon. Why such a weapon? Because we let’s learn from what is happening in Ukraine. We learn from how the aggressor attacks, from the way Russia attacked. We can see that armored forces and artillery are of great importance on the battlefield nowadays, hence the decision to strengthen this type of armed forces,” noted the head of the Ministry of National Defense.

The equipment ordered is a real reinforcement of the Polish deterrence and defense potential. Ultimately, it will be produced with broad participation of the Polish defense industry and taking into account the opinions and assessments of military experts. Orders are characterized by a fast delivery rate and a significant transfer of technology to Poland.

“In the case of tanks, it is extremely important that we have a very large force at our disposal. Hence the large number associated with reservoirs. Korean tanks, like all Korean weapons, have proven themselves because Korea has been preparing for war for 70 years, wanting peace. It is known to be under threat, so this Korean equipment must be of the highest quality,” the head of the National Defense Ministry said, referring to the tanks ordered.

K2 tanks – the order is divided into two stages – the first will acquire 180 tanks (deliveries will start this year), and the second stage is for more than 800 tanks of K2PL standard – in 2026 the production of K2PL tanks will start in Poland. The tanks acquired during the first stage will also be polonised and brought up to K2PL standard.

As the Deputy Prime Minister pointed out, the first stage of deliveries, assuming the delivery of 48 howitzers, will begin this year.

“In the case of howitzers, the design is very similar to Polish KRABs. I strongly insist that we will order as many KRAB in Poland as possible, so that all the production capacities of the Polish factories will be used. But our needs are much higher than Huta Stalowa Wola’s production capacity, which is why we decided on such a transaction. I emphasize that our cooperation with Korea is strategic. It does not fill the gaps we have in our armed forces. It is a strategic approach,” the Deputy Prime Minister said.

“We have an agreement that in the coming years the production of this weapon will take place in Poland. This is a great opportunity for the Polish defense industry. I am glad that the President of Polska Grupa Zbrojeniowa, Mr. Sebastian Chwałek, took part in the negotiations. These are negotiations that resulted in very good contracts. The implementation contracts are still ahead of us, but I am convinced that we will find absolutely good solutions, beneficial for both sides, for the Polish side and for the Korean side. We want to choose the best of the KRAB design and the best of the K9 design in the next few years, so that this weapon is uniform for both countries. I would like to emphasize once again, because there have been misunderstandings here, that we will fully utilize the production capacity of Huta Stalowa Wola. Production capacity also developed, because, as we know, PGZ plans to very quickly increase the production capacity related to the production of howitzers” – underlined Mariusz Błaszczak.

Deliveries of another 600 howitzers will begin in 2024, and from 2026 they will be produced in Poland. From the start, K9 will be equipped with Polish communication systems and will be connected to the Topaz integrated combat management system.

“The first aircraft will be at the disposal of the Polish Air Force next year. First of all, these planes will allow us to withdraw post-Soviet planes. Secondly, they will allow us to intensify the training of Polish pilots. Thirdly, they are training and combat aircraft, so they will be used in various types of missions that we carry out”, underlined in reference to the contract for the acquisition of FA-50 aircraft.

First, the Air Force will receive 12 aircraft in mid-2023, with a total of 48 aircraft being delivered. The FA-50s are light and versatile training and combat machines. The aircraft will be configured in accordance with the precise requirements presented by the Polish Air Force (IFF NATO), will have increased operational capabilities and the Block 20 standard.

“Recent geopolitical events and the unprecedented attack of the Russian Federation against Ukraine show that peace is not given to us once and for all. We must prepare for this peace, prepare for what Prime Minister Mariusz Błaszczak has said, to deter a potential aggressor. And for the deterrent potential to be sufficient, the decisions taken by the Prime Minister to constitute an army of 300,000 men require the equipment of this army of 300,000 men, because the human potential must also be technically prepared to fulfill its obligations – said Sebastian Chwałek, who was present at the signing of arms contracts.

“The agreement signed between the Korean side and the Armaments Agency is the beginning of the road in which Polska Grupa Zbrojeniowa, in which the Polish defense industry has an important place, has its place. We will soon be the beneficiaries of these agreements. Soon we will be the beneficiaries of the implementation agreements, on the basis of which, starting from 2025, we must prepare for a much larger production capacity, the possibility of producing hundreds of heavy military equipment in Poland. The factories included in PGZ are already starting preparations today. Both with regard to the K9 howitzer, which we will eventually produce in Poland, next to the KRAB howitzer”, underlined President Chwałek .

“The signing of the framework agreement is indeed very important for the government of the Republic of Poland, but also for the government of South Korea, for our arms industries, because our countries are now entering into a strategic partnership and a strategic cooperation. Hyundai Rotem will certainly expand this partnership with Poland, especially when it comes to localizing production here in Poland with a full transfer. I am confident that the two countries will be great partners on behalf of the future, the more we expand our cooperation to other areas,” said Lee Yong-Bae, President of Hyundai Rotem.