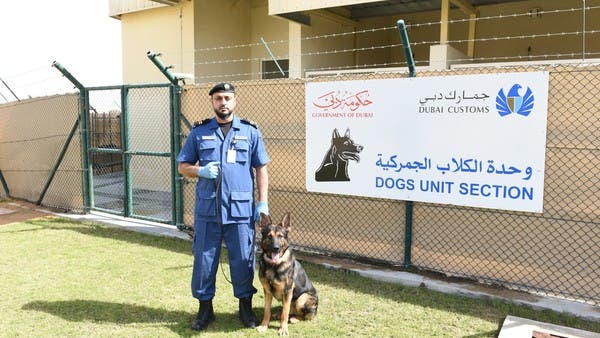 With an elite sense of smell 10,000 times better than humans, dogs make perfect detectives – and Dubai Customs’ K9 unit helps catch criminals and thwart the illegal flow of narcotics and explosives across borders of the United Arab Emirates.

In an exclusive interview with Al Arabiya English, Dubai Customs revealed that its team of canines – including Springers, Spaniels, German Shepherds, Malinois; a Belgian sheepdog – and Labradors – have played a key role in 84 major drug busts over the past five years.

For all the latest headlines, follow our Google News channel online or through the app.

Dogs, said Adil al-Suwaidi, director of the technical assistance department of Dubai Customs K9 unit, play a significant role in drug and explosive seizures at different ports in the emirate. He explained that their incredible sense of smell, maneuverability and loyalty make them an invaluable asset to Dubai’s border security.

Major seizures, which were made with the help of the sniffer dogs, included a seizure of 308,020 captagon tablets at Deira Wharfage, which were hidden under the wooden floor of a dhow.

Another seizure took place in Jebel Ali where captagon pills, hashish and crystal meth were found hidden in a shipment of scrap metal.

“These dog breeds are active, hardworking, stubborn, alert and protective,” al-Suwaidi explained. “They use their keen sense of smell – which is up to 100,000 times better than a human’s – to locate hidden narcotics or explosives.”

There are 20 trained dogs in place, who are supervised and cared for by a team of experts.

The K9 unit was established 15 years ago in 2007 as part of Dubai Customs Technical Assistance Department and the first group of four search dogs – two Malinois and two Labradors – began working with their dog handlers the same year.

Advanced training programs are important to ensure the effectiveness of the K9 unit’s operations, al-Suwaidi said.

Detector dogs have extensive and regular training, as do their handlers. This relationship between dog and human is essential.

Training a detector dog can take between three and 10 months.

“The inspectors in charge of sniffer dogs receive regular training on methods of detecting drugs and prohibited substances, as well as body language, and they work in harmony with their dogs to thwart the various contrabands,” said al- Suwaidi.

Even by canine standards, the dogs in the K9 unit have an impressive sense of smell thanks to generations of selective breeding.

Above all, dogs no longer work only in freight or customs areas.

The dogs provide aid to air, sea and land ports in the emirate, and they work shifts to cover 24 hours a day.

“The Technical Assistance Department provides training and equipment to all customs centers,” al-Suwaidi said. “We equip the training centers with the most advanced inspection devices and, with the help of the sniffer dogs, we are fully equipped to fight against all smuggling attempts.”