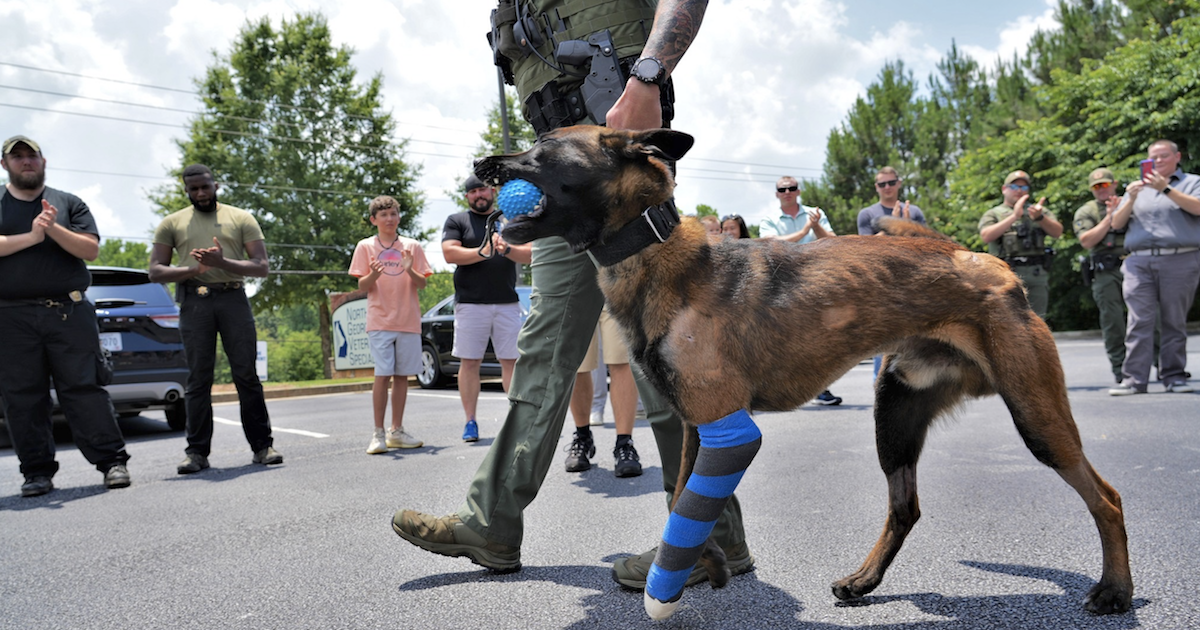 K9 police have their legs amputated after shielding officers from bullets

K9 Kai had only been with the Gwinnett County Police Department for less than a year, but quickly became a valuable member of the team. The 2-year-old Belgian Malinois worked as a dual-purpose K9, so he helped out with narcotics and patrol.

But unfortunately, Kai’s hard work came to a halt when he was seriously injured on the job. When Kai and his handler, Cpl. Aaron Carlyle responded to a situation where the suspect had a gun; Kai got shot and sent to an emergency vet. The brave dog refused to stop fighting.

On May 24, 2022, the Gwinnett County Police Department responded to a domestic incident where a man armed with a handgun threatened a woman. The armed suspect fled the scene before Kai and the police arrived. So K9 officers and the department’s aviation unit tracked down the man.

The department located the suspect in a wooded area. Officers approached the man with Kai at their side. But before the police could get too close, the man fired his gun and Kai jumped into the path. When the suspect’s bullet hit Kai, one of the officers shot the man in response.

The suspect was revealed to be a 17-year-old named Levi Bryan, who survived the incident and was sent to hospital. Kai was rushed to the vet, where he was in stable condition despite multiple gunshot wounds.

“He’s a hero to me and the officers who were on that trail that night because he did rounds that were meant for us,” the Cpl said. said Carlyle. “And he never wavered from his work.”

Kai doesn’t give up

Bryan received several charges, including one for harming a law enforcement animal. Fortunately, Kai survived the traumatic incident, but his road to recovery was not easy. As the officers took him to the vet, they gave him as much first aid as they could, which probably bought him some time.

Kai had several gunshot wounds, he needed a blood and plasma transfusion, and there was a hole in one of his lungs. Later, vets decided they had to amputate his leg to maintain his quality of life. Kai stayed at the emergency vet for weeks to fully recover, but now he’s finally going home with Cpl. Carlyle.

“This week, Kai underwent surgery which we are pleased to report was a success,” the Gwinnett Police Department said. “He is currently at home being cared for by his master, Cpl. Carlyle.

Kai is now undergoing physical therapy to get used to his missing leg. Cpl. Carlyle said that while Kai won’t be returning to work, the pup will still live with him and be spoiled like crazy. Kai’s time as a K9 officer may have been brief, but he had such a big impact.