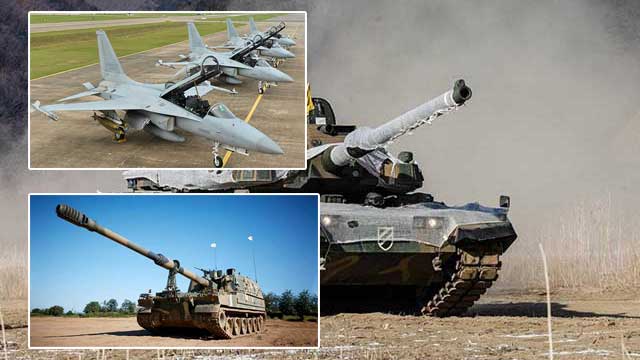 WARSAW ($1 = 4.73 Polish zlotys) — Poland will buy three of South Korea’s flagship military products that the Asian country is proud of. 672 self-propelled howitzer K9 Thunder is considered by some to be the best in its class in the world. 1,000 South Korean K2 main battle tanks are also considered one of the best new generation tanks. 48 FA-50 light combat aircraft used for both combat missions and pilot training.

According to the Belgian Army Recognition portal, such a purchase is expected, as it is part of the Polish army modernization plan. Army Recognition writes that Poland will receive the first 180 tanks by 2025, with their deliveries starting in 2022. The remaining quantity should start shipping after 2025. The Belgians also say that Poland plans to buy 12 FA light combat aircraft -50 and the remaining 36 will be upgraded to KAI FA-50PL.

BulgarianMilitary.com recalls that indications of future excellent cooperation between the two countries in military trade appeared during the last international defense and security exhibition Eurosatori Paris 2022. Then the two countries officially announced the signing of a agreement on the production of Polish-Korean K2PL tanks.

What did the Polish Ministry of Defense say?

The new date today and was announced by the Minister of Defense of Poland, Mariusz Błaszczak, via a tweet on his official Twitter account. Błaszczak said that the contracts for the delivery of the three types of military equipment were signed today. Błaszczak announced that the goals of the Polish government were for the future Polish army to have 300,000 soldiers.

The three weapon systems will go through the process of industrial cooperation. Poland has the necessary capacity and production facilities to participate in the production of self-propelled howitzers, tanks and aircraft.

The K2PL tank was the first for which it was clear that Warsaw would want to participate in its production. A model of it was presented at the Eurosatori Paris 2022 show. During the exhibition, the agreement signed by the two countries stipulated “joint development between Poland and South Korea”.

Most likely, a significant part of howitzers and self-propelled aircraft are also made in Poland. South Korea offers its partners with large arms orders similar cooperation. This collaboration with Poland is an attempt by Hanwha Defense to establish a more serious presence in the European market.

BulgarianMilitary.com recalls that the biggest purchase of K9 self-propelled howitzers took place this year when Egypt signed a contract for 200 units [before Poland] and Hanwha Defense have agreed to have more than 70% manufactured under license at a factory near Cairo.

Rumors of a K2PL tank

Currently, there is no exact information about what the tank will look like and what different features and elements will be integrated into it to meet Polish needs.

However, photos of models shared on social media claim that they show K2PL’s design. According to them, the Polish-Korean tank will have a 7th wheel in the wheel mechanism, which will make the K2PL longer than the usual length of the main battle tank. Rumor has it that the tank will receive a new turret design, and the ammo distribution will also be improved.

There is no information on what the main gun of the tank will be [will it keep the 120mm cannon of the K2 Black Panther or will it be used differently]nor the secondary weapon, which serves as protection in close combat.

Follow us anywhere and anytime. BulgarianMilitary.com has a responsive design and you can open the page from any computer, mobile device or web browser. For more up-to-date news, follow our Google News, YouTube, Reddit, LinkedIn, Twitter and Facebook pages. Subscribe to our newsletter and read our stories in News360App in AppStore or GooglePlay or in FeedlyApp in AppStore or GooglePlay. Our standards: Manifesto & ethical principles.