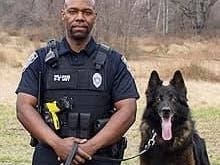 NEW MILFORD, CT – The New Milford Police Department mourns the loss of K9 Officer Drake, who served in the force for nine years before retiring in December.

Drake was diagnosed with cancer a few months after retiring, and Sgt. Michael Lafond told Patch he passed away on Saturday.

That day, members of the department and K9 teams from surrounding agencies gathered to give Drake a “last ride” to the vet office before he was put to sleep, Lafond told Patch.

K9 Drake’s handler was Officer Mark Williams, and the department put up a touching video with photos of Drake and Williams and a video of Drake’s last ride.

“K-9 Drake was a loyal partner and served the people of New Milford and the department with distinction,” Lafond said. “I had the privilege of training with Drake and was very proud of the work and effort he and Officer Williams put in.”

He assisted in several narcotics investigations, helped locate two missing persons and worked with Williams to “locate a man who wanted to harm himself,” Hearst said.

“K-9 Drake will be terribly missed by his handler, Officer Williams, his brothers and sisters in blue, and the citizens he served,” the department wrote on Facebook. “Our thoughts are with Officer Williams and his family.”

Lafond, Kira’s handler, said the German Shepherds were dual-certified patrol officers and narcotics who worked together for nearly a decade.

“German Shepherds are a loyal and intelligent breed and will always hold a special place for me personally and members of the New Milford Police Department,” Lafond said.

Williams will continue his career with a dog handler, as Lafond said he was recently paired with K9 Ella, a hunting dog.

K9 by Natural World, on Beacon Hill Road, Newark, will open next month