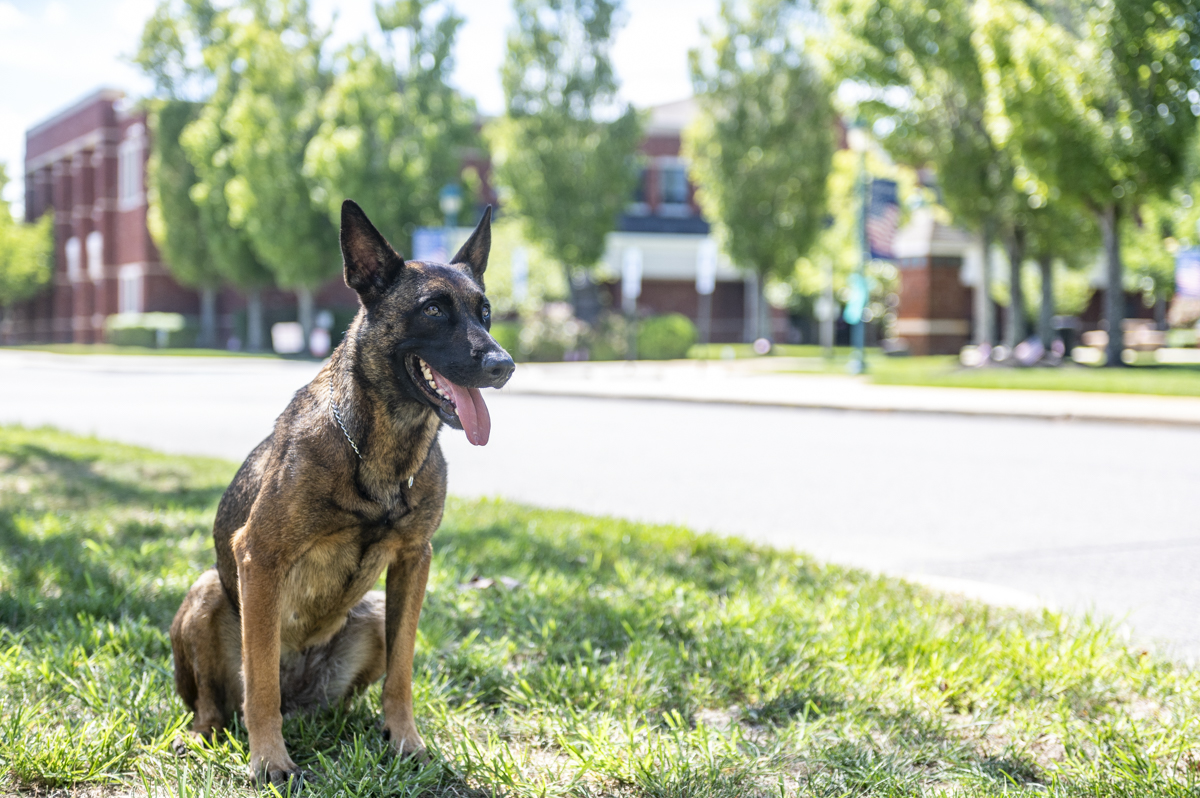 NEW KID ON THE BLOCK: Following the retirements of K9 officers Ollie and Raven, Venus joins the force as Det. partner of Zach Wiatrowski and will only perform narcotics detection. (Photos by Ryan Morrill)

Ollie and Raven were patrol dogs, he explained, meaning they could do tracking and criminal arrest, and then narcotics too. Venus, Wiatrowksi’s first police dog, will only do narcotics detection, not bite work.

She was born in the Netherlands from a winning line and sent as a puppy to a seller of similar breeds, in Mahwah. The Malinois is one of four varieties of Belgian Shepherd, known as reliable working dogs.

The three characteristics to look for in a narcotic dog are prey, play and seeking, Wiatrowski said. A short initial encounter gives an impression, but not the full picture.

“She had the best (traits) of any dog ​​we looked at, so we took her home,” he said. The first two weeks were a trial period to see how she interacted with Wiatrowski’s family, other dogs and strangers.

For narcotics detection, “we don’t want an overly aggressive dog,” he explained. “Look, she can just sit here. She is cool. You can pet her.

Patrol dogs, on the other hand, are too aggressive to be seen in the general public.

A dog’s training for police work can begin as young as 16 months, but most start around 2 years old, Wiatrowski said. Narcotics work is less physically taxing on a dog than patrol work, so a drug-sniffing dog may have a longer career.

When Wiatrowski takes Venus to training, he calls her “going to work.” For her, it’s a game.

“I could throw this ball all day, and she just wants to keep going and going,” he said.

They completed a month of basic obedience training in July, with the department, in-house. In early August, they started one-on-one with Atlantic County John “Sonny” Burke K9 Academy coach Joe Nick. The program can last from eight to 12 weeks, depending on the reaction of the dog and the handler. Nick estimates that Venus will graduate in early October.

“When you’re in drug school and you watch her work, she says on it, you’re like, ‘Wow, that’s pretty cool,'” Wiatrowski said.

He marveled at the mental connection he and Venus quickly made.

“I can’t find the drug because I can’t smell it, so it literally works. I have to read her behavior, but she can’t talk to me,” he said. Venus looks at her partner as if to ask, “Where’s my toy?” But he has to leave her to fend for herself. During this time, they get to know each other’s minds and body language.

According to Wiatrowski, drug school is less about discipline and more about fun. “You want her to have so much fun,” he said.

They play fetch with rolled up towels that have been sealed in a bucket with a quantity of an illicit substance, to impregnate the fibers with perfume. Praise teaches it to associate smell with reward, and this is how it imprints certain drugs. She knows cocaine, crack, methamphetamine, heroin and ecstasy. When she finds the scent, she sits down to point it out and waits to be rewarded with the towel.

“These dogs are major assets,” Wiatrowski explained. If the police have reliable information about the presence of drugs in a car, they can ask to search the car, but if the answer is no, the green light from the dog is worth as much as a warrant.

“We take her out, she steers the car, she sits down, says positive, we can search the car on that,” he said.

Dogs previously trained to detect cannabis have been rendered moot by its legalization. Today’s K9s are unaffected by its smell.

Stafford is trying something new by placing a K9 officer in the drug unit — the dogs were always on the road before, Wiatrowski said. Depending on how everything goes, the department may add a second K9.